Guess who the biggest gainer in m-cap in 2019 was?

Sunil Mittal’s Bharti was the biggest winner in 2019 despite its flagship Bharti Airtel reporting record losses during the September quarter, the group gaining as investors reinstated faith in the Airtel stock, believed to be an industry survivor and seen gaining market share especially in the high revenue post-paid segment, reports Krishna Kant.

It’s not all gloom and doom for India’s top business groups, despite a general slowdown in the economy.

Quite a few of the industrial houses witnessed strong double-digit growth in their market capitalisation (m-cap) in the last calendar year, as investors moved their money to large-cap stocks away from mid- and small-caps.

Groups with market leadership in sectors such as consumer goods, retail lending, and information technology services have benefitted.

In comparison, groups with exposure to troubled sectors such as automotive, capital goods, infrastructure, and metals and mining, were punished by equity investors.

Sunil Mittal-promoted Bharti group has been the biggest gainer among large business groups, followed by the Rahul Bajaj and Mukesh Ambani groups.

At the other end of the spectrum, Essel Group topped the list of losers, followed by Vedanta and Munjal (Hero) group.

Bharti has been the biggest winner in 2019 despite its flagship Bharti Airtel reporting record losses during the September quarter.

The group gained as investors reinstated faith in the Airtel stock, believed to be an industry survivor and seen gaining market share, especially in the high revenue post-paid segment.

Many investors appreciate Airtel having a diversified revenue base, with the Indian telecom business accounting for only half its consolidated revenues, unlike its peers.

Its m-cap has risen close to 88 per cent in CY19, making it the top-performing index stock.

Together with its subsidiary Bharti Infratel, the group’s combined m-cap has risen 63 per cent this year to Rs 2.82 trillion, from Rs 1.73 trillion a year ago.

The Rahul Bajaj group comes next, with a 43 per cent jump in its combined m-cap during CY19.

The group consolidated its position as the third largest business group in terms of m-cap, led by retail lender Bajaj Finance.

At its current stock price, the lender is valued at Rs 2.5 trillion, accounting for nearly half the group companies’ combined m-cap. 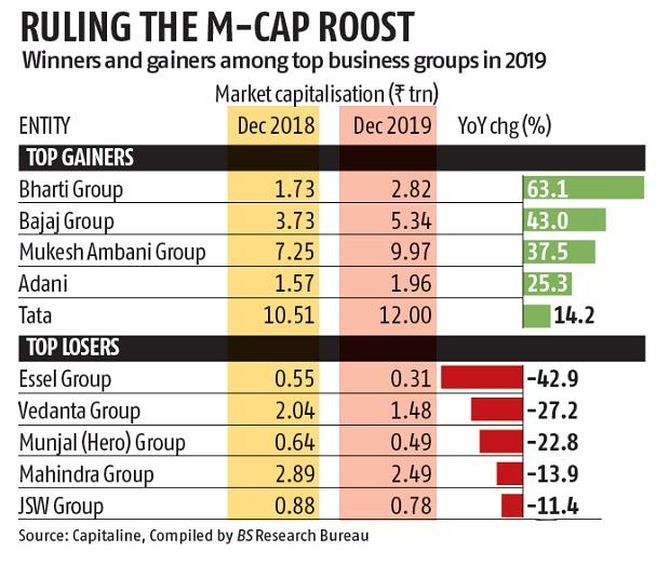 Its stock has gained 39 per cent this year.

However, the group’s media entities — TV18 Broadcast and Network18 Media — saw a sharp decline in share prices even though their total m-cap is small.

Adani Group and the Tatas also gained in 2019.

The former gained on account of a rally in Adani Transmission, Adani Gas, Adani Power, and Adani Enterprises.

Most of the gains were led by Tata Consultancy Services and Titan, which together account for 80 per cent of the group’s combined m-cap, up from 75 per cent last year.

In comparison other key group entities such as Tata Power, Tata Steel, Indian Hotels, Tata Chemicals, and Tata Communication saw a decline in their m-cap, while Tata Motors was up 6.5 per cent during the year so far.