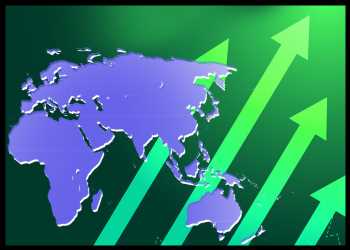 The Australian stock market is slightly lower in choppy trading on Thursday, giving up some of the gains in the previous three sessions, with the benchmark S&P/ASX 200 staying above the 7,400 level, despite the broadly positive cues overnight from Wall Street, with traders remaining cautious amid mixed reports on the efficacy of Covid-19 vaccines against the fast spreading Omicron variant.

There are concerns over the rising Covid-19 cases in Sydney and other cities, with New South Wales reporting 420 new cases on Wednesday, of which 8 are of the new Omicron variant and total cases being 42. Victoria also reported 1,232 new cases and nine deaths, with no Omicron cases.

Among major miners, BHP Group and Rio Tinto are losing almost 1 percent each, while Fortescue Metals and OZ Minerals are edging up 0.5 percent each. Mineral Resources is edging down 0.5 percent.

Oil stocks are mostly lower. Woodside Petroleum and Oil Search are edging down 0.4 percent each, while Beach Energy is losing almost 3 percent and Santos is down almost 1 percent. Origin Energy is edging up 0.2 percent

Among the big four banks, Commonwealth Bank and ANZ Banking are edging down 0.3 percent, while National Australia Bank and Westpac are flat.

The Australian Securities and Investments Commission (ASIC) this week launched legal action against ANZ Bank after it failed to pass on financial benefits to more than half a million clients over two decades.

Shares in Vulcan Energy are soaring more than 17 percent after auto giant Volkswagen agreed to purchase a minimum of 34,000 tonnes and a maximum of 42,000 tonnes of battery grade lithium hydroxide over 5 years.

Shares in Sydney Airport are gaining almost 3 percent after the Australian Competition and Consumer Commission said it will not oppose superannuation-fund-owned IFM Investors’ $23.6 billion cash deal to buy the airport operator.

In the currency market, the Aussie dollar is trading at $0.717 on Thursday.

The Japanese stock market is modestly lower in choppy trading on Thursday, giving up some of the gains in the previous two sessions, with the benchmark Nikkei 225 staying above the 27,800 level, despite the broadly positive cues overnight from Wall Street, with traders remaining cautious amid mixed reports on the efficacy of Covid-19 vaccines against the fast spreading Omicron variant.

Market heavyweight SoftBank Group is gaining more than 1 percent, while Uniqlo operator Fast Retailing is edging down 0.3 percent. Among automakers, Toyota is flat and Honda is down almost 1 percent.

In the tech space, Advantest is edging down 0.4 percent, while Screen Holdings is gaining more than 1 percent. Tokyo Electron is flat,

In the banking sector, Mitsubishi UFJ Financial is losing almost 1 percent, while Sumitomo Mitsui Financial and Mizuho Financial are edging down 0.3 percent each.

The major exporters are lower. Panasonic is losing almost 2 percent and Sony is down almost 1 percent, while Mitsubishi Electric and Canon are edging up 0.1 percent each.

Among the other major losers, Hitachi Zosen is losing more than 5 percent, Ricoh is declining almost 4 percent, Mitsubishi Motors is down more than 3 percent and Hitachi is slipping almost 3 percent.

In the currency market, the U.S. dollar is trading in the higher 113 yen-range on Thursday.

Elsewhere in Asia, Hong Kong is gaining 1.1 percent, while China, South Korea, Indonesia, Malaysia, Taiwan and Singapore are all higher by between 0.1 and 0.6 percent each. New Zealand is bucking the trend and is down 0.7 percent.

On Wall Street, stocks turned in a lackluster performance for much of the trading session on Wednesday but managed to end the day mostly higher. The uptick on the day extended the substantial rally seen during trading on Monday and Tuesday.

Meanwhile, the major European markets moved to the downside on the day. While the U.K.’s FTSE 100 Index closed just below the unchanged line, the French CAC 40 Index and the German DAX Index slid by 0.7 percent and 0.8 percent, respectively.