The junior Ambanis – Anmol and Anshul – were inducted on the board to respect the wishes of the shareholders who during the recent AGM asked the management to get fresh blood into the company by bringing them on board. 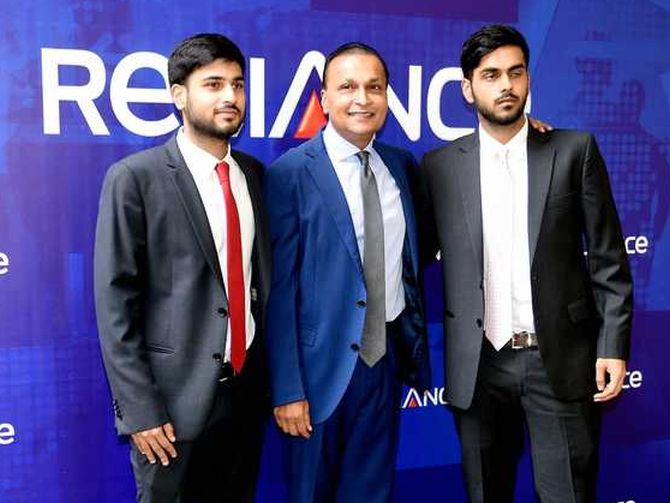 Anil Ambani-led Reliance Group has inducted both the sons-Anmol  (27) and Anshul d(24) – as directors on the board of infrastructure vertical RInfra.

The company has also appointed retired Army officer Lt Gen Syed Ata Hasnain as an independent director on the board of the company, it said in a statement on Wednesday.

Anmol has been on the board of Reliance Capital since August 2016, while the younger one, Anshul joined group this January, and has been actively involved in all operations of RInfra, including a special focus on the defence business, working closely with the group chairman and Punit Garg, executive director, the company said.

As of July 2019, four group companies alone, excluding the bankrupt telecom arm, were sitting on a debt pile of about Rs 93,900 crore.

A company spokesman attributed the induction of the junior Ambanis to respect the wishes of the shareholders who during the recent AGM asked the management to get fresh blood into the company by bringing them on board.

During the recent AGMs, Ambani had said the group was shuttering the two lending arms of Reliance Capital-Reliance Commercial Finance and Reliance Home Finance with a cumulative asset of over Rs 25,000 crore — by December.

On Monday, the group nearly exited RCap’s AMC business – which used to lead the market for long and now has gone down a distant fifth slot – -to Nippon Life of Japan which now owns 75 per cent in the company and has since been renamed as Nippon Indian Mutual Fund for a collective investment of Rs 6,000 crore.

The group has long ago existed the telecom business and the company, once a leading player, RCom is in the bankruptcy court since February.

Many other group ventures like the defence vertical are also struggling for long now.

At the AGM, Ambani had blamed the crisis and the resultant decision to  exit to the severe collateral damages the group had taken due to a combination of factors-crisis in the financial services sector, irrational action by auditors and rating agencies and now the slowdown of the economy.

He had claimed that these events aided and abetted by reckless selling and rumour-mongering by vested interest have affected the shareholders of the Group companies.

He had also said the group is planning to pay creditors Rs 15,000 crore more by March next year.