Why China's Neo Can Do What No Other Cryptocurrency Can

Amid recent bans imposed by China, Neo has the potential to emerge as the cryptocurrency of choice in the heavily regulated nation, and perhaps across the globe. (For more, see China Intensifies Crackdown On Bitcoin Mining.)

Since its inception, Neo’s Onchain technology was designed to be regulator-friendly with a centralized approach that is quite different from most other cryptocurrencies.

This article explains the technology behind Neo and Onchain, their relationship, how they differ from standard blockchain technology, and what potential synergies and opportunities lay ahead, including the rumor that they may yet win acceptance by the Chinese government.

Neo was originally founded as “AntShares” by Da Hongfei and Erik Zhan in China in 2014, and was rebranded “Neo” in June 2017. It is a blockchain-based platform that supports its own cryptocurrency and enables development of digital assets and smart contracts.

Neo aims to automate the management of digital assets through the use of smart contracts, with an eventual aim of building a distributed network-based smart economy system. (For more, see Are Smart Contracts the Best of Blockchain?)

How Does Neo Work?

Assets can be easily digitized on the Neo blockchain in an open, decentralized, trustworthy, traceable, and transparent manner that is free of intermediaries and associated costs.

Users are able to record, buy, sell, exchange, or circulate various kinds of assets, as Neo provides the necessary platform for linking the physical asset with an equivalent and unique digital avatar on its network. Neo also supports protection of assets, as assets registered on its platform through a validated digital identity are “protected by law.” 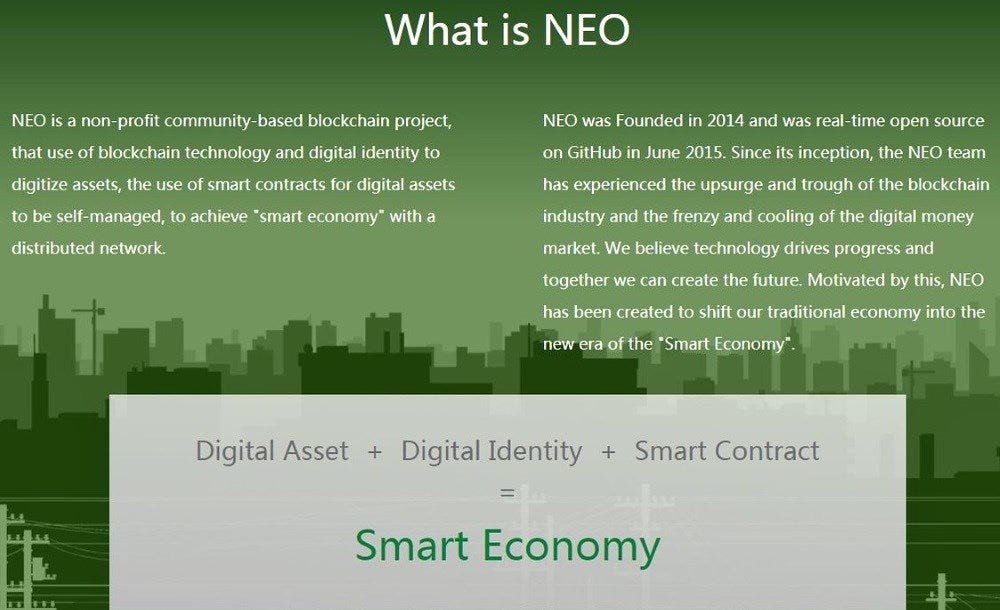 Smart contracts enable the execution of transactions and agreements among different parties without the governance by any legal system or central mechanism. The execution of such contracts is based on the programming code of the network, and it allows traceability, transparency and irreversibility of the transactions.

Neo supports two cryptocoins, NEO and GAS. It supports programming in all mainstream languages including C#, Java, Go, Python and Kotlin, which enables a large community of developers to easily contribute to its platform.

Focus on Being Regulatory-Compliant

Neo maintains a clear distinction from other standard blockchain platforms, as its focus remains on being regulatory-compliant. While digitized assets and smart contracts are also popular on other blockchain platforms like Ethereum, the third key feature of “Digital Identity” separates Neo from the rest.

Every individual, business, or any other entity operating on the Neo platform is expected to have a unique digital identity that will be verifiable. People, businesses, and projects have the option to transact among themselves only if the other party has the required identity, which makes the Neo network regulatory-compliant.

Even the various nodes on the Neo network may need to have identification before they can contribute to the transaction verification and other activities like accounting and bookkeeping.

While Neo works like bitcoin and ethereum, Onchain focuses on the creation of private and consortium blockchains to meet the specific needs of the industry.

Onchain’s major product, Distributed Networks Architecture (DNA), uses digital asset applications to help businesses by creating private and public blockchains. DNA is believed to be the blockchain platform that can be customized to address all sorts of different problems in the private and public sectors.

Relationship Between Neo and Onchain

Neo and Onchain are two separate entities that exist independently, and neither owns the other. Neo targets the B2C segment, where C can refer to customer or even community, while Onchain focuses on B2B enterprise services.

Both are separately funded. Neo is funded by a public community, while Onchain is backed by China’s largest private conglomerate called Fosun.

When asked why he chose Fosun as an investment partner, founder Da Hongfei said:“The three major arms of their (Fosun’s) portfolio include finance, medical science, entertainment and lifestyle, which has good synergy with blockchain tech. This is why we chose Fosun Group as an investment partner, because we highly value the Enterprise resource that Fosun provide, a platform for Onchain to display blockchain technology.”

The two common founders of both companies, Neo and Onchain, envision that in the future, they will be able to achieve cross-chain interoperability. That is, a mechanism will be developed where the necessary connections to share information between the various blockchains, such as public ones like Neo, and private ones, like those operated by a business, will become possible.

As the number of blockchain-based systems continues to grow in both the public and private domains, there will eventually be a need to have interoperability among various blockchains. The teams at Neo and Onchain expect to fill this gap through their ongoing work.

However, to enable such interoperability, trust and identity become important. That gap will be filled by the intrinsic “Digital Identity” feature which is an integral part of the Neo blockchain platform.

Essentially, Neo and Onchain may pave the much-needed middle path between the completely decentralized, unregulated, anonymous blockchain system like bitcoin, and the completely regulated, KYC-compliant economy like the present-day system of bank accounts and credit cards.

By taking an all-inclusive approach that attempts to involve and serve the needs of all the parties – the individual users, the network contributors like miners, the transacting participants, the private businesses, and even the regulators – Neo and Onchain may be best placed to provide a holistic solution to the ongoing rift between the closed-economy regulators and the open-system cryptocurrency enthusiasts.

A Solution for China?

The Neo platform acts as the foundation of Onchain’s DNA concept. Neo provides decentralized, public blockchains while OnChain’s DNA fills the need for private blockchains. Linking both these systems enable one to get the best of both worlds.

Onchain has already received an endorsement for DNA from the government of Guiyang, the capital of Guizhou province of Southwest China. Both parties jointly released smart contract 2.0 and other Chinese blockchain technology in early 2017. In mid-2017, Onchain was among the first batch of companies that successfully passed the Chinese blockchain test, which was followed by an investment partnership with the Fosun Group.

Despite China tightening its grip on cryptocurrencies recently, the acceptance of blockchain technology is a clear possibility. (For more, see Is Bitcoin Banned in China?)

In mid-2017, the Chinese government was reported to be experimenting and creating its own national cryptocurrency. (For more, see Chinese Government is Developing its Own Cryptocurrency.)

Despite its hard stance on the various decentralized cryptocurrencies and ICOs, rumors are swirling that the government may be looking for an alternate solution and it remains open to working with companies that are willing to play by its rules. Being local Chinese ventures, Neo and Onchain are the top contenders if this is true.

If the promising Onchain technology can be accepted and integrated with the Chinese government and businesses enabling an all-inclusive solution, then it will greatly increase the widespread adoption of Neo.

The technical robustness of the Neo-Onchain concept and its centralized approach looks promising, making it an attractive option not just for Chinese authorities, but for other foreign governments that are wary of the anonymous and decentralized virtual currency market. (For more, see Bitcoin Price Crashes On Fear Of South Korea Cryptocurrency Ban.)