Billionaire Peter Thiel Goes Long on Bitcoin, Iffy About All Other Cryptos

PayPal Holdings Inc. (PYPL) founder and billionaire Peter Thiel praised bitcoin, the world’s largest cryptocurrency by market capitalization, indicating that in time, it will squeeze out smaller rivals such as ethereum. Thiel made the remarks at a talk at the Economic Club of New York on Thursday.

The angel investor recently announced that he was leaving Silicon Valley for Los Angeles, a city he finds more accepting of his right-leaning ideas and open support of President Donald Trump.  (See also: Square to Soar on Crypto Potential, Say Bulls.)

Thiel’s venture firm, Founders Fund, has been quietly buying up bitcoin since 2012. The venture capitalist, worth over $2.5 billion according to Forbes estimates, suggested that it possible for the popular digital currency to become a digital equivalent to gold. 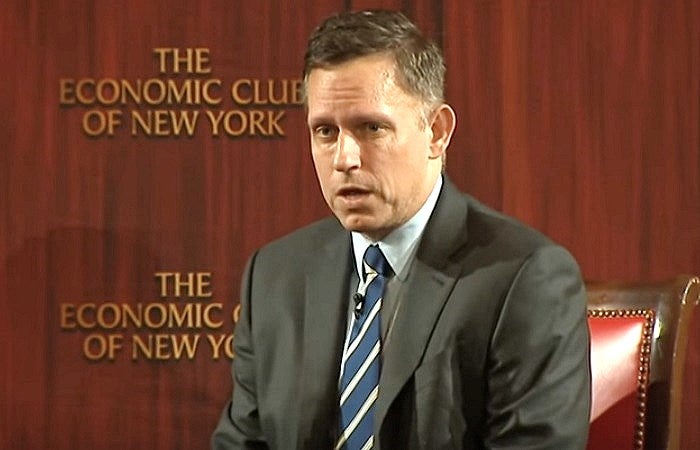 “I would be long bitcoin, and neutral to skeptical of just about everything else at this point with a few possible exceptions,” said Thiel during the speech. “There will be one online equivalent to gold, and the one you’d bet on would be the biggest.”

Thiel sees bitcoin serving more as a store of value rather than a means of exchange for daily transactions. “I’m not talking about a new payments system,” he clarified. “It’s like bars of gold in a vault that never move, and it’s a sort of hedge of sorts against the world world going to fall apart.” (See also: Bitcoin to Plunge Below Feb. Lows: Goldman Sachs.)

Thiel, who was an early investor in Facebook Inc. (FB) and sits on the social media giant’s board of directors, indicates there’s a 50 to 80 percent chance that bitcoin ends up being worthless, and a 20 to 50 percent probability that it moves higher. That’s a great bet for the venture world, where the odds of a startup taking off are often pegged at 1 to 10.

“Probability weighted it’s good, and the question of how to time this I’m not going to try to do that precisely,” added Thiel, who noted that there’s also a chance that other digital currencies could beat out bitcoin or that newcomers will offer better features. He’s still betting on bitcoin for its sheer size, however. (See also: Bitcoin Is a $15,000 Beanie Baby, Says John Oliver.)

Investing in cryptocurrencies and other Initial Coin Offerings (“ICOs”) is highly risky and speculative, and this article is not a recommendation by Investopedia or the writer to invest in cryptocurrencies or other ICOs. Since each individual’s situation is unique, a qualified professional should always be consulted before making any financial decisions. Investopedia makes no representations or warranties as to the accuracy or timeliness of the information contained herein. As of the date this article was written, the author owns cryptocurrency.